S keptic and I are not philosophically opposed—at least not vehemently so—to toy guns, though our preference, our habit of living, has been for a firearms free home.  Until the other night, that is, when we somewhat inexplicably gave the boys Nerf guns for Hanukah.  The guns were bigger than I’d expected (a downside to distracted online shopping), the boys not quite as pleased as I’d hoped.   Gift giving is complicated.

SchoolLess is twelve, SmallerMan nine, they are rapidly moving away from the age of play.  Is this a case of us not wanting to acknowledge that time marches on, that they—and we—are getting old?  I don’t think so.  I’m in that place a lot, I know what it feels like.

SmallerMan has complained recently about his lack of cool toys: no Wii, no PSP, no smoke and mirrors. Not sure if this is about what he wants or how he wants to represent.  SchoolLess tends to be dismissive of such mainstream trifles, whether that’s based on core values, an inherent discomfort with sensory overload, or his fear of parental disapproval, I can’t say.

Both boys have had their share of fun-and-gun filled afternoons in the homes and yards and pools of friends.  And, when young, I proudly and happily holstered up, cap gun at the ready:  cops, robbers, cowboys, Indians, squirrels, pigeons—bang, bang, you’re all dead.  The guns seemed a reasonable compromise, relatively cheap, relatively harmless, not qualitatively different than a pirate’s sword or a Jedi’s lightsaber.

Bikes, footballs, and cookbooks pose a greater risk to physical well being, and we certainly never banned those things.  And what about the danger to psyche and selfhood of a Barney I Love You Singing Doll, phonics flashcards, the latest time-sucking PSP, and any number of other imagination-impeding diversions?

I am concerned about both the violence running rampant in our world and the pornographic media representations of it.  God forbid a twelve-year-old hears the word “fuck” or sees a woman’s nipple, but we allow them to view bloody, disfigured images from Oil Wars, real or virtual, again and again until they become either inured to or transformed by it. 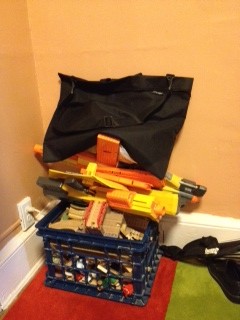 A violent ethos can dominate a culture or a soul.  As we descended the Temple Mount this summer, we observed young Arab boys ducking and dodging among ancient stones and olive trees.  The pit-pat of their toy guns accompanied us as we dodged the gauntlet of souvenir hawkers, pilgrims of conflicting faiths, and Uzi-wielding members of the Israeli army on our way to a nearby falafel stand.

Enough privileged middle-aged white man angst:  why can’t I simply let the children be children?  Answer:  there’s meaning in everything we give and in everything we don’t.  Ignore that reality at your own risk.

What happened is our busy, driven, consuming, blindered world.

SchoolLess once invited an African-American friend over for a play date.  Her father dropped her off and asked me this:  “Do you have any fire arms in the house?”  I’d never thought to ask that question, always assumed that the families of my kids’ friends—wherever they fell on the color spectrum—were not among the 35 percent (or more) of gun-inhabited households .  We have been blessedly untouched in our ever-gentrifying, Manhattan-centric, politically correct Brooklyn bubble by the long barrel of the NRA.  Nor do we face the daily threats of violence that lurk in what some of the neighborhood’s remaining long-time residents might call “dark” corners.  Where have you gone Al Capone?

SchoolLess often gets upset about gifts that he feels are wasteful or indicate that the giver doesn’t really know who he is.  We’ve all been there:  “Thanks for the, uh, lovely [fill in the blank]”—flying cats tie, Barry Manilow box set, gym membership.  Do you even know who I am?

We don’t always know those we love—who they are and who they want to be—as well as we think we do.

There’s an economic theory that suggests that the only way to maximize value is to give cash.

Every day is Black Friday in America.  See the overflowing graveyard, out back of the Wal-Mart, of rusting rotisserie cookers, smashed porcelain unicorns, and a rainbow of cancer-causing plastic.  Recession be damned, woot woot.

The most appreciated gift I ever gave was the time I took my younger brother on a hike and picnic (I was eleven, he was four).  My Nana Ruth was thrilled, as a girl in pre-Nazi Germany, to receive a fresh orange for her birthday.

My father once surprised my mother with a giant red tricycle (it was the ‘70’s, give him a break) that she, understandably, never rode.  Skeptic was so unexplainably offended by my gift of Jeff Buckley’s CD Grace—pre-Shrek—that it might as well have been the latest-newest-bestest vacuum cleaner:  “Smile while you clean, honey!”  The meaning of the gift clearly disappointed her, though she never could explain why.

My parents donate goats to needy families in Africa in the boys’ names.

When it comes to “stuff” (or words or salt), this is what I believe:  as little possible, as much as necessary.  These aren’t easy judgments to make or live by.  We don’t want to spoil our children but we don’t want to deprive them either.

On the last night of Hanukah, unconflicted, we gave the boys the ping-pong table of their dreams.