M y usual MO when SchoolLess and I arrive at SFC with our organic oatmeal in hand is to keep my office door “open, but as closed as possible,” which may say more about me than I’d like it to.  Today, with my teaching duties ably discharged until September, the door remains fully shut for the duration.

SchoolLess, just making conversation (I’m going to miss these ease into the day moments), asks if I know when sneakers were invented.  I don’t, though I’m honored that he thinks I might.  In an ideal world, this question would have defined our home school day: the history of rubber, the connection between invention and commerce, perhaps a foray into race and the American Dream.  In the real world, the agenda had already been set: math assessment, Carver paper, catching up on music.  No room on the schedule for the impromptu. 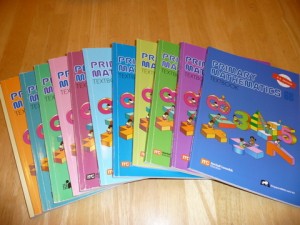 SchoolLess has struggled with his end-of-year math assessments and he’s frustrated.  “I put in so much time,” he says, and mostly this is true.  I’ll spare you his rant against Singapore (the math curriculum and the country).  Suffice it to say, points were made.  On the other hand, he’s going to face epistemological incongruities at every turn—in school, in work, in love, in the mundane—and, unless he wants off the grid, he’s going to have deal.

When confronted with flawed individuals and institutions, SchoolLess needs to tone down the blame and compartmentalize the anger.  That sense of being surrounded by ass-backwardness can lead to excuses or motivation, it’s his call. 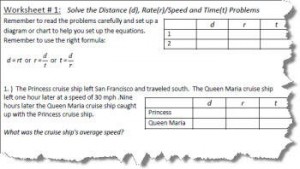 Some of the problems were, in fact, “nasty” (weird triangles, confuzzling language), but he also forgot some stuff he needs to know, like rate times time equals distance.  Which courier delivered his message to the king first?  At what point will the head on collision occur?  How far ahead of the horse is the cart?  These are my kind of problems, once an algebra guy always an algebra guy, but to SchoolLess they are so last year.

Having to navigate a variety of different approaches—test prep, the Old Professor, the Lamenting Mathematician —has been a challenge for SchoolLess, one that may help him cope with philosophical disunity down the road but hasn’t necessarily benefited him in the short term.

Before Skeptic smacks me upside the head, let me just say that SchoolLess actually does quite well on standardized tests.  On the SHSAT he scored well enough to get in to every school on the list but Stuyvesant (and he wasn’t more than a couple right answers away from that), and this just-short-of-elite level is par for the course.

This is not to say that SchoolLess is a natural test taker, as he tends toward indirection, resists expediency, and embraces nuance.  These qualities are a mixed bag and I often wish he had a more straight on way of thinking.  I also believe that if the world doesn’t dissuade him from his natural inclinations, these non-conforming traits will someday serve him well.

I am not suggesting that intelligence is a case of different but equal.  There is greater and lesser, better and worse.

But a test measures what it measures and nothing else.  We acknowledge the limitations but fears and insecurity prevent us from putting truth to power.  Before we know it we are, both in action and inaction, condoning a culture we abhor. 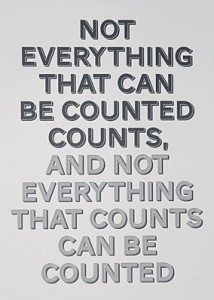 SchoolLess has his issues but increased self-awareness over these two home school years has ameliorated them.  The tumors are shrinking but he’s not out of the woods yet.  He still gets too easily caught up in “pseudo productive activities,” a syndrome with which I am familiar.  His attention wanders.  He has—who doesn’t—a problem with technology, often losing himself in Facebook or Hulu or Google for longer than he realizes.

So much in SchoolLess’s future is dependent on his ability to remain in control of his relationship with the invaluable, unavoidable, and pernicious virtual world.

Is it asking too much that he graduate from high school with a few true friends, a healthy work ethic, and his intellectual curiosity intact?  Fingers crossed, knocking on wood, bated breath.  This is what it’s come to.

There are consequences to having one’s intelligence underestimated by standardized tests.  Self-esteem may be threatened, of course, but the real threat—and really, when you think about it, it’s not much of one—is that one may end up at a less competitive, which is not to say less good, college than one shoulda coulda woulda.  That’s all you got?

SchoolLess may be HYP material but may not register as such, though maybe if we spring for the test prep guru who helped his cousin nail a 2100 on the SAT he has a shot.  I’m just not sure that’s where I want to put our money or his time.  It’s easy, I know, to think of test prep as temporary, cosmetic, and practical, but then you wake up one morning—tomorrow, a year from now, on your death bed—and realize that somewhere along the way not only your kid’s brain but his soul has been lobotomized. 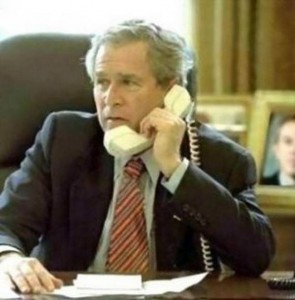 I am perfectly willing to concede that SchoolLess’s intellectual potential and productivity will be assessed, by himself and others, for the rest of his life.  There are plenty of people, from Einstein to Steve Jobs, who did not thrive in formal school settings but kicked ass once free of the ties that bind.  Larry Bird couldn’t jump, John Irving couldn’t read, Helen Keller couldn’t see or hear, but they all found ways to compensate for weaknesses and overcome the misjudgments of others.  I know plenty of dumbasses with Ivy League educations.

I first discovered mathematical beauty in baseball statistics.  Gödel, Escher, Bach transformed my college girlfriend into a math geek.  I am still hopeful that SchoolLess will have a eureka moment in which he finds mathematical meaning and motivation, connection and context.  Maybe it will come while he’s playing Go or writing a fugue, maybe while contemplating the heavens or in a dream.

SchoolLess was decidedly more interested in the romance part of the ex equation than the math part.  What he really wanted to know was how many girlfriends I’d had before Skeptic.  When I told him “two and half,” he responded, “That’s sad.”

I worry, too, about SmallerMan and math.  His sharp number sense seems to have been drummed out of him.  It’s as if he’s been taught to see math as a set of tricks rather than a collection of dynamic concepts and relationships.

There’s an over-emphasis on practicality and procedures, on efficiency and certainty.  I’ve said this before: curriculum has become de facto test prep.  Forty weeks of school, twenty chapters.  It’s not rocket science.  Or is it?

An artificial sense of order, like foolish consistency, is the hobgoblin of little minds.

SchoolLess is hard at work on his paper:  “The Carver Spectrum: Lish’s and Altman’s Clashing Interpretations.”  I’ve read a draft and it’s good, but there’s more to say.  He is unmoved by my insistence that analysis is not enough, that there is undiscovered meaning in the connection he has made.

Raise the intellectual stakes, young man!  Privilege your own ideas, as the academic rhetorician says.  Learn me.

He assures me that he knows he still has to sum things up but I remind him that, paradoxically, conclusions don’t come at the end, by then it’s too late.  Early and often!  This puts me in mind of a passage from Strunk and White about the importance of choosing a suitable design and holding to it: Writing, to be effective, must follow closely the thoughts of the writer, but not necessarily in the order in which those thoughts occur.

The formula is simple, at least once you’ve been reminded of it, the metaphor not so much.  On the road as in life, rate is always subject to vagaries:  weather, traffic, speed limits.  Time is of the essence, but a variable as much qualitative as a quantitative.  And now, all of a sudden, the problem isn’t as solvable as it once seemed.

Then there’s the question of distance:  How far do you want to go?

But here’s a better question:  Where do you want to go?

The formula works in its place, of course, but the metaphor can work however you make it.

“Leave the gun,” Clemenza, in The Godfather, advises his henchman after a hit , “Take the cannoli.” 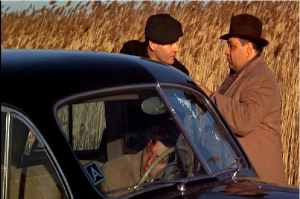 The gun served its purpose and nobody wants to go to prison.  Cannolis are delicious and he promised them to his wife.

In whatever world you live in—yours, mine, the mafia’s—there’s a moral code, a right way to live and a wrong way.  For better and worse, it’s as simple as that.

Leave the formula.  Take the metaphor.