Letter to SchoolLess #2: The Poets Know of What They Speak

The Private Made Public, the Public Made Private
"Even the most momentous happenings flatten out with time and in memory." I was talking to a friend about a facet of the latter aspect—the private made public—telling him that communicating this way sort of feels like a cop-out. Why can’t we just talk? We can, we will, but there’s not always time, particularly now that you are away (and will be increasingly so); and another thing: the act of listening takes patience (not an accusation, this applies to both of us); also, not for nothing, I want to get the words right (or, at least, right-ish), not always possible in the rush of the extemporaneous moment. And when we do talk about serious stuff, I’m never quite sure to what extent your nods and uh-huh’s mean, “Thanks, I get it, appreciate you looking out for me,” as opposed to, “Shut the fuck up, get out of my face.” I’m also never quite sure whether I’m talking as some sort of platonic father or your father, for your benefit or mine.

I don’t mean these public letters to be a substitute for actual sit-down conversations, but rather see them as building blocks that will allow us to talk more openly, more honestly, and more deeply. Putting things in writing is also a way for me to have my say without interruption (see also: bully pulpit). I am a writer, after all, at heart if not always in practice, one who was once described–make of this what you will–as simultaneously pre-verbal (meaning, as I understood it, surprisingly and notably uncomfortable, ineffective, and inarticulate, at least at times, as a speaker of words) and post-verbal (meaning the exact and extreme opposite of those things when it comes to writing). That’s the argument for letters, obviously, but not for the dissemination of them. That argument, and I’m putting modesty aside here, is that there are others—how many a question for debate—who will find what I have to say to you at least somewhat instructive to them in a how-to-be-a-parent (or, I suppose, how not to be), how-to-live-a-life (or how not) kind of way. There’s also this, with my thoughts not only in writing but “posted” in the unerasable ether (a.ka. the Internet), there’s less risk of in one ear out the other (believe me, I get the impulse toward dismissiveness). In any case, these letters will be there for you, if and when you’re ready for them. And if not, if never, maybe your kids will be interested?

I’m tempted to write letters to others, as well: SmallerMan, obviously, but colleagues and students; friends, family, acquaintances; the rude barista, the parking-spot-hogging neighbor, the mayor. I have plenty of unsought advice to share! But, in the case of one potential missive I shared with @Restive_Mind, I was cautioned (nice to have friends who have my back), “That would be interesting. Too bad you’d lose your job if you wrote it.” And I am not so caught up in myself that I cannot see how broadly that warning might apply. My words of intended wisdom will have to be more generalized, couched and indirect, perhaps less likely to connect with my intended target but resonant enough in a more inclusive sense while still managing to keep the relative peace: don’t eat so many goddamn bagels; don’t let your wife (or husband or kid or dog) walk all over you; don’t tell me something that isn’t true and expect me to A. believe it and B. act like I believe it. 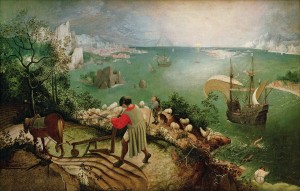 Read a couple of poems linked to on Facebook in honor of 9/11—Auden’s “Musée des Beux Arts” and Williams’s “Landscape With the Fall of Icarus”—both about, among other things, the relationship between great tragic events and the mundane world of our daily existence. Even the most momentous happenings flatten out with time and in memory, life “[sails] calmly on,” what once seemed special becomes “a splash quite unnoticed.” In the case of 9/11, the emotional impact feels increasingly theoretical, at least for me, for us, lucky enough not to be directly connected to or affected by particular deaths. Those who lost loved ones are in a different place, of course, as even if the emotional intensity of their mourning has decreased—a lessening that may, ironically, add an additional layer of heartache—their so-called new reality will always be actual and concrete (They need, and have, other poems to call their own.) But back to my world, the point I want to make to you: years pass and “something amazing, a boy falling out of the sky,” comes to matter more as representation, which is what it now primarily is, than as the reality it once was.

What, then, can we—I, you, all the lovely people—learn from this representation? 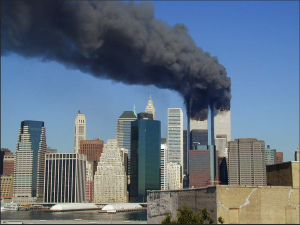 I remember 9/11 well, obviously, as you blessedly do not, the way what was happening slowly dawned: a friend at the door after witnessing from the F-train overpass the incomprehensibility of a plane crashing into a skyscraper; a jumble of confused news reports; the other tower hit, bringing increased clarity and panic; and then an inexorable rumble, first heard and felt, then visually confirmed, first on TV and then, trust but verify, from the roof of our building—the first collapse—seen, seen again, another time, once more, again, and so forth. An indescribable acridity in the air; ash dust on cars, playground, skin; burnt papers—financial statements, business letters, a resume—floating across the river and settling gently down in our backyard. 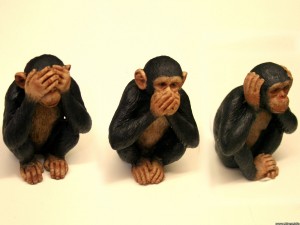 All I cared about was keeping you (just over three) and SmallerMan (seven months) as far away from any knowledge or sense of what had happened as possible:  “see no evil, hear no evil, speak no evil.”  (The proverb is more complicated than that, I know, but simplification serves my rhetorical purpose:  I wanted evil banned from your consciousness.  As for nuance, save it for another day:  we’ll talk.)

You guys spent most of the day upstairs with DJ: reading books, playing with blocks, listening to music. I paced, unable to sit, watched footage and listened to the prattle of commentators. I cleaned the kitchen, planned dinner, e-mailed reading assignments to my classes (“Hope to see you Thursday!”), as if such things were of a critical importance. We ate pizza with mushrooms. Once Mom made it home, we wandered out a bit, all whom we encountered in the same psychic haze. We reached out to check on friends and family who were in one way or another—geographically, emotionally—closer to the disaster than we were, but mostly we cocooned, as if protecting ourselves from relatively benign meteorological elements, known and manageable predators, a desperate effort to avoid acknowledging the horrifying and all-encompassing inclemency that had suddenly enveloped us all.

I did not cry much, occasional tinctures of tears, triggered when a cantor chanted a prayer in an odd Hebrew-English hybrid, names of the deceased, details of their lives; when I cuddled with you in your bed while listening to Pete Seeger sing “Where Have All the Flowers Gone?” and when my persistently cataclysmic thoughts were momentarily interrupted by one of you oh-so-innocent lads breaking into a smile. 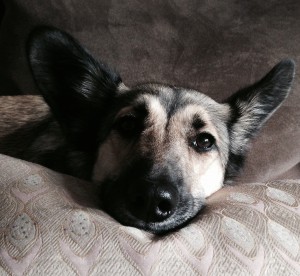 And today, as the poets promised, is a regular day: a walk with the dog, some reading, picked up the vacuum cleaner from the repair shop, took a nap, stuffed some peppers, and couldn’t quite shake a feeling of foreboding, the nature of which I can’t quite put into words. 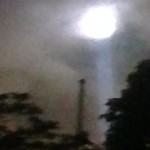 Last night, in the yard looking up at those fog-smeared blue streaks shooting up from Ground Zero, language was once again not up to the task: “sad” and “beautiful” and “long time ago,” true is not enough. I came inside, brushed my teeth, climbed into bed, and thought: “It’s not over. Something is going to happen.”

In other news, normalcy rules, and isn’t that delightful. I may have mentioned being blown away by the Chris Thile/Brad Mehldau concert. A Lonergan play—your man Michael Cera, Mom’s girl Tavi Gevinson, music by one of the Vampire Weekend guys—and dinner with friends to look forward to. Seems like (orthodontists are notorious liars) SmallerMan’s braces are coming off in a month. First full week of classes done. Interesting chat with students about how to become a real person: read, write, think, engage with ideas, it’s not rocket science (no, really, it’s not). Leaves are just beginning to turn, an unfraught coolness in the air. I have no legitimate gripes.

And yet, mixed with thoughts about how we are going to celebrate the one-year anniversary of the pup’s arrival and where SmallerMan and I might have lunch on Saturday, there’s this persistent thought: the world has gone mad, violent thoughts and words and actions every which way you look, hubris and complacency abound. (Icarus, my friend, you were warned, man, you were warned!) Even if most of the fucked-up-ness feels removed from our immediate lives, I can’t help asking, are we—by which I mostly mean you and SmallerMan, the future—totally fucked?

Somehow I do not find these thoughts overwhelming or debilitating. As at the same time, my mind is consumed, and comforted, by practical matters; the blessing of a generally happy life? Scheduling adjustments and confirmations to attend to. Toe nails to clip. Are the Pevear-Volokhonsky translations really all that? What position should Mookie Betts play? Can’t decide whether to serve the mozzarella with the pasta (tomatoes, corn, scallion, mint) or on the side. Do you, my son, have any use for my ramblings? Does anybody?

Always great to hear your news: busy, is good; yes, E.B. White can write; and, wow, can’t believe you slaughtered and butchered chickens!