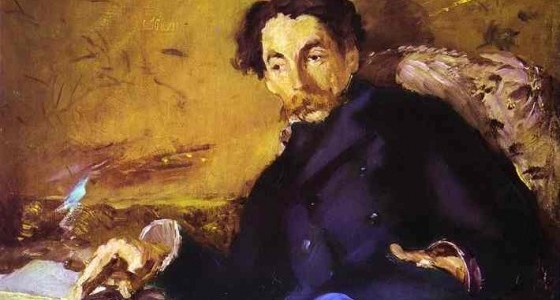 I haven’t written here in what feels like a very long time.  There’s no lack of material.  I have notes and files and lists a plenty.  I’ve been busy—aren’t we all—but not that busy.  There are no excuses worth making.  Skeptic may be right:  in matters requiring discipline, I am “delicate.”

This is a situation—and a topic—that I wanted to avoid:  the post about not posting, the wallowing, the if only. The road I have recently traveled is littered with abandoned posts, some because they’re too easy—The 10 Best (or Worst) Things About Home School—and others because they are too difficult, the emotional matter fearsome and foreboding.

I have plans, but only that, to follow up on previous posts:  “What Ain’t” with “What Is,” “Where’s the Rigor?” with “Oh, You Meant Vigor, “Verging on Hysteria” with “Verging on Euphoria.”  Issues in

education, all ripe for commentary, are debated in the news and the blogosphere everyday.  There’s the Tiger Mother, for crying out loud, a gift horse if I ever saw one.

In a moment of desperation, I formulated “Notes from Dead of Winter,” thinking I’d leave it to you, dear readers, to find meaning in my miscellany.  Here’s what that might have been like:

Tucson, Dürer, Palin.  Why don’t my students understand metaphor (see Yo La Tengo, “How to Make a Baby Elephant Float”)?  Stressed kids/ stressed parents.  Authenticity, originality, deepest self (“Foucault” scribbled in the margin, a red flag waving).  Writing prompt:  “It never snows.”  In a café, “Somewhere Over the Rainbow” playing in the background:  a man turns  to his wife (?) and says, “all things kinetic, all things in flux.”  There’s a fabulist in the family.

I worked briefly on a post called “I Don’t Know,” but I don’t remember, I don’t know, what it was about:  something to do with humility, I think, Confucius played a part, but then what was “My Bad”?  Why did I abort my MLK Day meditation on race, character, and guilt?  Whither Sloth Daddy?

In discussing possible downsides to home schooling, a couple of educator friends mentioned “executive function.” I had only a vague notion of what this meant, which may tell you all you need to know.  I looked it up.  Scholastic defines it as “an imposing name for a group of essential mental tasks, including planning, strategizing, organizing setting goals, and paying attention to the important details that will help achieve those goals.”  I get all those things, will to power and all that, it’s the implementation that eludes me.  I worry about SchoolLess’s transition to high school, and beyond, in regard to such enterprises.  I keep promising myself not to remind him to do this, that, or the other.  I vow to allow him to remember (or forget) of his own volition, but I can’t help myself.  When he moves on, when he and I are less tethered, will he be able to figure it all out?

Of course, parents of schooled kids do the same thing, as do schools, and with home school comes a variety of responsibilities that most kids wouldn’t normally expect to attend to until adulthood, if then.  SchoolLess has stepped up in countless ways over the past months, leaving me pleased and proud.

I am better at planning a productive day for SchoolLess than I am conceiving of the long-range arc of his learning.  And maybe that’s okay, maybe one productive day after another is the best path to a productive week, month, year, life.  Maybe an organic, flexible, creative approach is the way to go.   Or maybe that’s me justifying who I am.

Last Monday, SchoolLess and I settled into my toasty office and, over organic apple oatmeal, talked schedules.  For SchoolLess:  base systems with his math tutor, my “Fiction Writing” class, an hour of Go with the Lamenting Mathematician, a Richard Ford story to read and mark up, an afternoon tennis clinic with friends, and then home to practice at least two of his three instruments (clarinet, sax, violin).

My day, on the other hand, was going to be considerably less reasonable, less enjoyable, and less enriching.  I had three classes to teach, including a three hour “Rabbit Angstrom’s America” seminar in the evening, a pile of festering papers, and more reading (I was afraid to do the math) than I cared to consider.

On the previous Thursday night, anticipating a busy weekend (music, sports, socializing) I stayed up late to get a head start on my work but ended up watching The Daily Show, Colbert, and Tavis Smiley.  On Friday morning, to make up for lost time, I got up early but, alas, got caught up in the news about revolutions and Carmelo Anthony trade rumors.  On Saturday morning, instead of reading Updike and commenting on found dialogue exercises, I surfed the net for tips on chili making (secret ingredients that do the trick:  chocolate, beer, molasses, cornmeal) and played Scrabble on my iPhone.

I am increasingly aware of how my behavior around work and my attitudes toward it are perceived by my kids.  Their habits reflect mine.  After I told SchoolLess the sad story of my upcoming day, he said to me, “You procrastinate a lot.”’  I nodded, grimaced, smiled, raised my eyebrows.  “And Mom does too.  I get it from both of you.”  Must we burden our kids so?

Here’s a joke that isn’t funny (or original):  A couple months ago, I read a review of The Thief of Time , philosophical essays on procrastination, and immediately ordered a copy from Amazon, overnight delivery!  It’s been sitting on my shelf, unread, ever since. 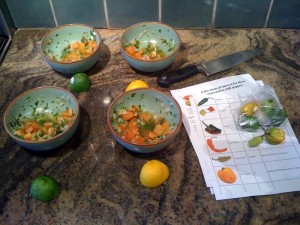 There’s always something.  The batteries in the tuner need to be replaced.  Skeptic has a question about dried beans and the nuances of “simmer.”  SchoolLess wants to tell me what he learned in salsa science “class” about capsaicin, the effects of acid, and the mysteries of umami.  SmallerMan is struggling with a page full of fractions.  I’m hungry.  I have a gripe to share.  The pot from last night’s soup hasn’t been washed.

I need.  I want.  Demands are made.  And then there’s my own mishagas. What are Hollinger’s latest odds on the Celtics winning the NBA championship?  Check Amazon:  where’s my stuff?  Did anybody send me an e-mail in the last two minutes?  What’s on TV tonight?  Did Skeptic confirm with her sister about Saturday night?  Has SmallerMan memorized “Indian Concertino”?  What’sa synonym for quandary?  Are we out of rice?  Do we have enough players for Wednesday hoops?  Don’t forget to call the piano tuner!

SchoolLess has been an occasional critic of the blog, finding some of the posts “all over the place.”  I have been dismissive of this particular assessment, chalking it up to immaturity.  He has also told me that he thinks my writing is “improving” (thanks for your support, son).  SmallerMan is only an occasional reader.  I do know he enjoyed the post based on our December sit down, though he did wonder “what happened to all the questions and answers.”

It’s not exactly clear to me what Skeptic’s overall take is.  She has commented positively on several posts and often laughs out loud as she reads. 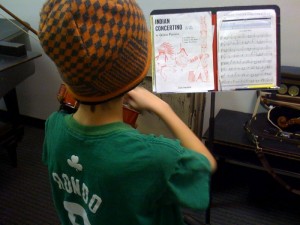 She seems to see the value in what some have called “documentation” or “reflection” but what I like to think of as “exploration.”  She likes, and is impressed with, the writing that SchoolLess has done.   But she hasn’t exactly encouraged the endeavor; her full support has been withheld.

In response to an early draft of “The Glint of Light,” albeit a somewhat more rambling, slightly more diatribic one, Skeptic let loose.  She had some choices words, including “rant,” “self-indulgent,” and “mean.”  She thought the post, if not the blog overall, was not enough about SchoolLess and home school:  too much “cheap philosophy” (what a friend, more kindly, calls “big ideas”).

I explained that this was what I wanted, to write about the whole state of “our fucked up world.”  It’s about me:  what I see is what you get.

After all, at the end of the day, what can a decent man talk about with the greatest pleasure?  Answer:  about himself.

The ever-quotable Skeptic ended her critique, the kids half cowering, half in stitches, with this [expletives deleted]:  “It’s like Notes from Underground but you’re not Dostoevsky.”

From others, old friends and new, I’m feeling the love, the downside of which is an ego boost, a feeling of grandiosity, that turns out to be just as disabling as doubt, negative feedback, and self-criticism.

Emulating that which you admire is an excellent way to learn, but discovering what you are in opposition to is also a useful and productive.  Do as I do, I can comfortably say to SchoolLess and SmallerMan when it comes to any number of things, but when it comes to work, when “executive function” is the topic of the day, please, boys, I beg you, do as I say, not as I do.  Or think of it this way:  do as I don’t.

On the bright side:

I may not be Dostoevsky, but I am writing again. 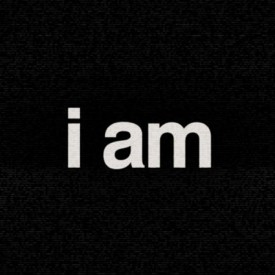 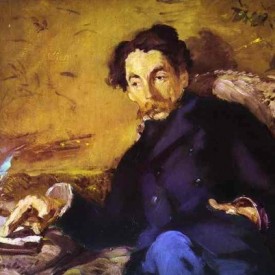 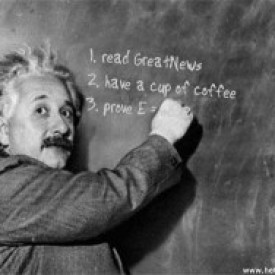 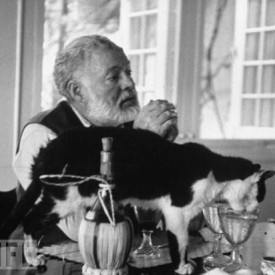 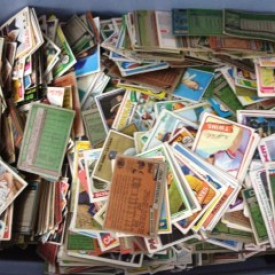 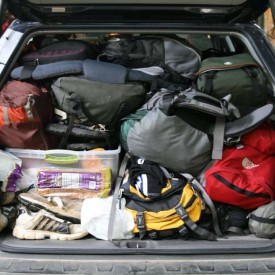 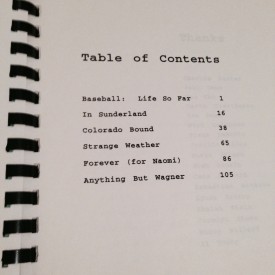