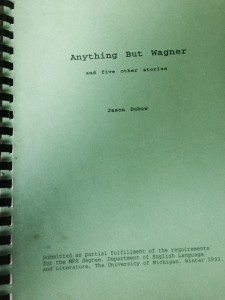 Y ears ago, in graduate school, I wrote a short story called “Anything But Wagner.”

The story was about a man named Joe, his dying mother, and their shared lives and memories.  Joe, who was more or less the age I am now, was very much caught up in the mysterious middle-ness of life.  (What did I think I knew about that then?)  Marriage, kids, career, all of it fine enough, some of it better than that, but he is burdened nonetheless by a pervasive sadness about the world and his place in it.

The last line of the story, after an afternoon spent with his senile mother celebrating, or at least commemorating, her birthday, is intended to sum up Joe’s sense of helplessness:  “I do what I can.”

I identify with Joe now, as I obviously did then, even if our increasingly aligned mindsets and circumstances are not identical.  In my more rational moments, when I take into account the complexities of human emotion and the lack of control we have over external circumstances, the good I have done in my life clearly outweighs the bad.

Like Joe, when it comes to my wife and kids, my still quite sentient parents, my job, etc., “I do what I can” is about right.

I am a writer who doesn’t write, an admission that might feel like the first step in my recovery if only it wasn’t something I’d said so many times before.  I feel like an addict—I can’t keep ahold of myself—but can’t quite put a finger on exactly what I’m addicted to.  I can’t find my equilibrium, either too drunk, so to speak, or too sober.  I am paralyzed by the semantics of human motivation, can v. will, need v. want.  I am lost in the gulf between possible and actual.  I don’t write one page because I am capable of writing two.

At least grant me this: writing about writing, as limited by self-referentiality as it may be, is writing.  Hedge, hint, haw, hack: something interesting is bound to emerge eventually.  It’s not as if I’m talking about my bowels.

If you find all this frustratingly elliptical—cue Skeptic’s, “Welcome to the club!”—I apologize, and ask you to do as my beleaguered wife has done:  bear with me.

The pile of dead posts in the mass grave of my mind has grown large these last months.  Some quick off-the-cuff autopsying of the remains reveals an ugly and predictable variety of causes of death: neglect, fear of failure, fear of success, lack of ambition, too much ambition, laziness, an inability to focus attention, an unwillingness to delay gratification, perfectionism, the list goes on.

An array of subclinical mental disorders—a touch of this, a dose of that, I’ll spare you a detailed delineation—isn’t helping the situation, but there have also been some artistic and moral concerns that have prevented me, at least this the story I tell myself, from writing.

This question was a favorite marginal comment of the one good teacher I had in high school.  Looney encouraged intellectual risk, unlike his peers who implicitly asked for and explicitly rewarded standard issue smart kid pap.  To our self-satisfied, myopic drivel, Looney responded in bold red ink (this before such things were deemed psychologically harmful to tender young minds): WHO CARES?

I care.  “The World According to Jason Dubow,” was one recent characterization, presumably positive, of this blog, need I say more?  And my caring is a necessary condition for your caring, but it is by no means a sufficient one.

Sticks and stones will break my bones but words—mundane, privileged, self-serving, navel-gazer, whiner, I see them on the tip of your tongue—will hurt me more.  The red pen looms:  who FUCKING cares?

Note to self:  Come to terms with degree to which my issues, concerns, struggles are First World Problems (so-called); or argue not so or label meaningless; or mount furious defense in support of existential angst.

There have been a number of similarly named get-back-to-it posts along these lines:  “Clearing the Decks,” “Done & Done, Etc., Etc.,” “A Monster Courting Insanity.”

I can’t write about what’s on my mind today—the demolition of the boys’ playhouse, whether or not I am “flowing the river of life,” loneliness—without first telling you why 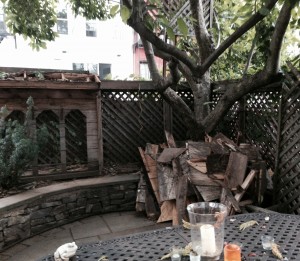 I’ve been away so long and why I’m back now, but I can’t do that because I don’t have a clue.

I can’t begin a post with, “We got a puppy today,”’ because that day was many months ago.  I can’t begin with, “The rain reminds me of” because it isn’t raining, though it was, obviously, on the day when the rain did remind of something.  I can’t begin with “Have you ever made pumpkin soup?” because the question is one of many ecstatic scrawls on my beloved yellow pads that time has rendered anechoic.

And why can’t starting with something light and simple about a puppy or a rainy day or pumpkin soup be the first thing?  There may be gold in them hills but there’s no way to know without climbing them.

I’m ever confused about the ethics and advisability of writing about others or, more accurately, writing about how others have affected me.

I shared with a lawyer friend a plan to write about a particular complicated extended family situation.  She wanted to know what I hoped to gain.  I explained that the dynamic in question had implications for my kids, that there was a universality to the story that made me think others would find it both engaging and instructive.  She seemed convinced by my argument but nonetheless cautioned, “Be careful what you put in writing.”

I’m  not worried bout legal action but about hurting feelings and the consequences—seen and unforeseen, real and created—of hose hurt feelings.

There are things I want to say that may pose a danger to the status quo.  But is the status quo such a sacred cow?  Things can always be made worse, but also better or just different, yes?  There is no more danger inherent in challenging the way things are than there is in not.  As John McEnroe commented about the conservative play of one of the men’s finalists at Wimbledon (not sure which and I may be paraphrasing): “It’s dangerous to play it safe.” 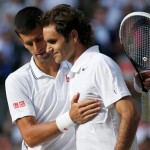 So let me say this: “All characters appearing in this work [of non-fiction] are fictitious.  And resemblance to real persons, living or dead, is purely coincidental.”

Please, all tongue-in-cheek disclaimers aside, do not take offense when you come across any of my forthcoming “persons of interest”:  Liar Liar and Operator in the Office, Shout Out to Self! and Spineless Lobster, Funny Lady and Detachable Man.  I’m a fiction writer at heart, if not in practice, I can make this work: obfuscation, judicious redaction, and enough plausible deniability to go around.

This might be one of those situations when it’s easier to ask forgiveness than it is to get permission, but I will not take that as carte blanche to share all Sensibleness, circumspection, and caution will rule the day, particularly when I suspect that a particular story or detail might create a direct, or indirect, problem for SchoolLess or SmallerMan.   After all due process, if I am able to answer the following four questions in the affirmative, then I will consider myself good to go.

When I first started this blog, I had a conversation with a literary agent friend who said about its potential as a book:  “You don’t know the story yet.”

Or yet, as the case may be, though several equally-sharp-on-narrative but less market-conscious readers have assured me that there is one or, more accurately, that I am on my way to one.

I’m mostly on the side of the agent.  I see a beginning, and plenty of middle, but no end in sight.  My life has not changed in any sufficiently demonstrable ways, something that may be existentially desirable but is certainly narratively problematic.

I am what I am.  Is that the end of my story or the death of it?  Dramatic failure or ultimate epiphany? 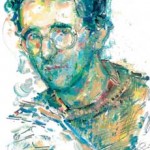 And then, just as my concerns seemed allayed, though certainly not vanquished, by the sheer act of codification—what can be named can be tamed!—I came across these fighting words from the late great Bolaño: “Of all the books, memoirs are the most deceitful because the pretense in which they engage often goes undetected and their authors are usually only looking to justify themselves.”

If I allow myself to stop and consider the moral complexities of the word “justify,” you may never hear from me again.  Instead, I will fixate on “usually, “and say, “Not I, Bolaño,” and hope my words are true.

“I have not given up the ghost,” I wrote recently to one-time mentor and writing writer Charlie B. in reference to the paucity of my literary output over the years, adding, “for what that’s worth.”  He did not address this tiresome contention, much as the wise man avoids eye contact with the madman, but I heard him loud and clear nonetheless: whatever.

Perhaps, like the fictional Joe of my youth, grounding myself in melancholy, an increasing acknowledgment that not anything is possible, and an acute sense of impending mortality (mine, yours, we’re all in this together), is a perfectly fine and reasonable way to be, a step in the right direction.

After all that time, is this all I’ve got?